Enrich Your Summer–Go See The Cripple of Inishmaan and Enter to Win!

I am fortunate enough to live next to New York City, so I have the privilege of getting to go and see some fantastic shows.  I’ve mentioned before that I got to see The Cripple of Inishmaan and I stand by my original opinion that this is one of the best shows I have seen.  Unfortunately, the show is in the last few weeks before it closes its limited engagement on Broadway.  I am thrilled I was able to go in and see it.  I loved it so much that I plan on going back in to see it again before it ends in three weeks on July 20th. I highly suggest that you do the same while tickets are still available! You can purchase tickets online.

Not only is Daniel Radcliffe an absolute treat to see, each of the other actors are equally talented and fascinating to watch on stage.  But more than anything, it was the story that kept me totally captivated.  Such a wonderful, touching and riveting tale. I grew to love the characters and was invested in their lives.  That is excellent writing talent! While I had never heard of Martin McDonagh’s The Cripple of Inishmaan before Daniel Radcliffe lent his name to the play, now that I have, I am really wanting to get to know more of his works.  Well, The Mommy Avenger readers are in for a treat, as you will have the opportunity to get to read two of his plays: The Beauty Queen of Leenane and The Lonesome West. We are giving away two sets containing each play to a lucky reader!

So enter to win copies of Martin McDonagh’s plays by following the directions below and then take a backstage tour to get a behind the scenes look at The Cripple of Inishmaan on Broadway!

I am very excited to offer two lucky readers the chance to win a set of Martin McDonagh’s plays (The Beauty Queen of Leenane and The Lonesome West)! To enter, email me at themommyavenger@hotmail.com with The Cripple of Inishmaan in the subject line or by leaving a comment below telling me your favorite play or show you have seen!  Please like The Mommy Avenger on facebook, pinterest and twitter for an additional entry (but leave a comment telling me you did!). Winner will be selected on or about July 20, 2014 by random via qualified entries and notified by email at that time. Open to US residents only.

This past week, my son and I had the pleasure of being invited to come to the city to see the newly opened play The Cripple of Inishmaan.  A huge fan of Daniel Radcliffe, we were excited to see the play, but we were in for a much bigger surprise with this performance than anticipated.

Set in the 1930′s on a small island off the coast of western Ireland, we are introduced to a small town and it’s simple, yet at the same time very complex characters, that live there.  One of the residents is Billy, a crippled young man that is the butt of many jokes by the townspeople. Billy is played by Daniel Radcliffe and as soon as he comes on stage, you know you are not watching Harry Potter.  Daniel did a fantastic job portraying this burdened young man and pulling at the heartstrings of the audience through his charming and touching performance. Although Billy is played by a major star, the other characters in the play are well matched to Daniel’s talent, offering the audience an incredibly gifted cast that will transport them swiftly into the town of and lives of Inishmaan. 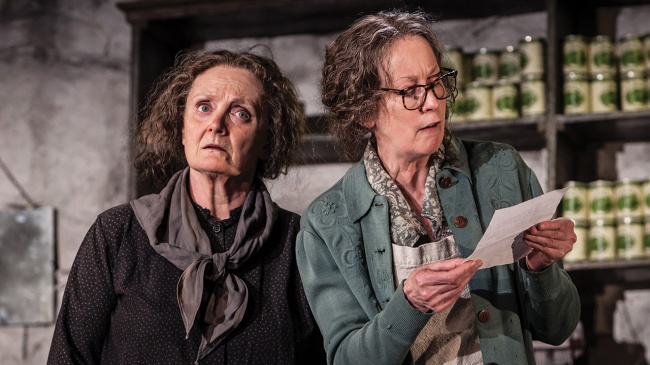 Not much changes in this town, that is until a Hollywood producer comes to Inishmaan to make a film.  Everyone wants a chance to be in the film, including Billy, although no one would think he was worthy of being in a movie. What happens from there is a surprise to everyone.

I was pulled into this story instantly and loved getting to know each of the characters in the play.  Billy’s aunts, Kate (Ingrid Craigie) and Eileen (Gillian Hanna), were fantastic.  I loved listening to their conversations and looked forward to each scene they were in.  The relationship they had with Billy was so sweet and endearing.  Johnnypateenmike (Pat Shortt)  the town gossip, was a riot! So much was revealed about each of the characters through his stories, you couldn’t wait to hear more.  Helen McCormick (Sarah Greene) and her brother Bartley McCormick (Conor MacNeill) are delightfully feisty and funny characters that are anything but politically correct.  Blunt and mean, Helen is surprisingly likable despite her fiery temper.  We are not the only ones to think so, as we soon learn that Billy loves her. 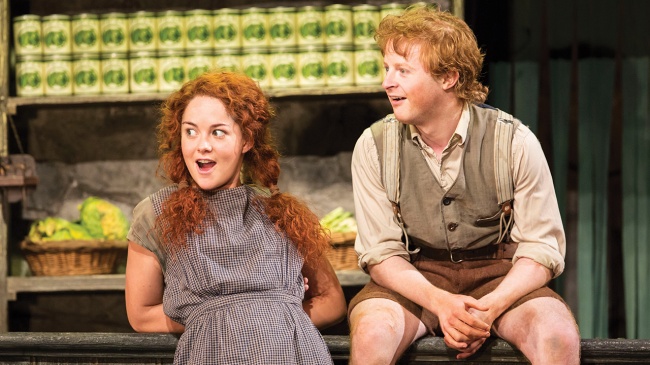 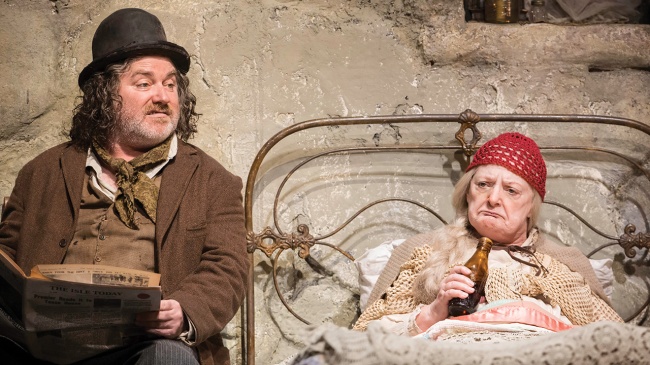 Although The Cripple of Inishmaan is a tragically sad story at the core, there is so much laughter throughout the show, that you don’t actually feel sad. It is a rather dark comedy, but one that you will reflect on for a long time after seeing the show.  You love the characters and are truly invested in their lives and how their stories will end.

I see so many plays and musicals, but this one significantly stands out to me.  I absolutely loved this show.  The more I think about it, the more I love it.  This is one I will go back to see again during its limited run (it ends July 20th).  So much depth is portrayed in this well written play. This is what theatre is all about.  I highly recommend this show to you, but be warned, there is some language and is best suited for older audiences (teen and up).

On a personal note, after the show, we had an opportunity to meet the cast of the show and each one was so gracious and sweet. We even got to speak with Daniel Radcliffe (and get some pictures with him!) which made the already wonderful experience even more special.

*We were invited to see the show to facilitate a review, all opinions are my own.