MEDIEVAL TIMES PARTNERS WITH THE COMMUNITY FOODBANK OF NEW JERSEY TO LAUNCH POST-HOLIDAY FOOD DRIVE TO HELP RESTOCK THE PANTRIES FOR THOSE IN NEED
Patrons pledging to donate non-perishable food items at the castle now through February 3 are eligible for a 40% discount on tickets
Medieval Times begins the New Year with a post-holiday food drive in partnership with the Community FoodBank of New Jersey as part of their “Chivalry In Action” program.  The food drive, which runs now through February 3, encourages patrons to drop off non-perishable food items in one of the collection bins located at the Lyndhurst castle.  As a thank you to those patrons who donate food items, they will be eligible to receive a 40% discount on Medieval Times tickets. 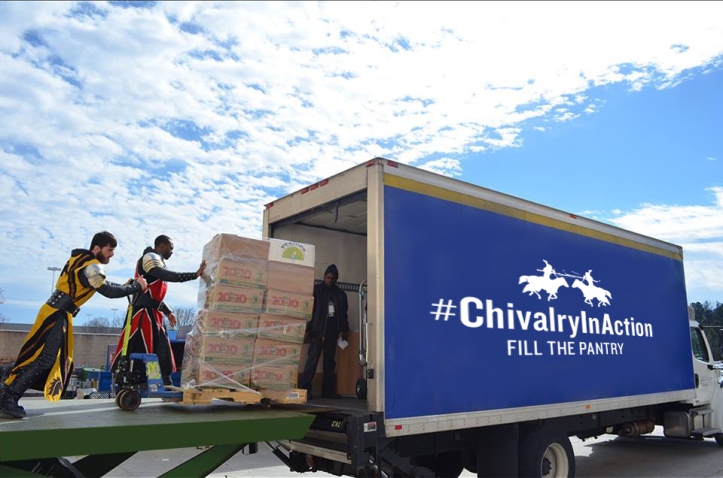 The holiday season is typically one of giving, and food pantries and other charitable
organizations often receive generous donations in the final weeks of the year.
However, once the holidays have passed, there is often a lull in donations and that can
be challenging for food pantries who rely on the generosity of others to assist people in
need.  To address that situation, Medieval Times is hoping this food drive can help
restock the shelves at the Community FoodBank of NJ.  “Chivalry In Action” is an ongoing program by Medieval Times that encompasses a wide range of community outreach, volunteerism and educational programming both in and  out of the castle.

Medieval Times Dinner & Tournament was founded in 1977 in Spain. It launched in North America in 1983 and has since opened nine castles across the United States and in Toronto, Canada. It has been performed for 65 million guests in its 34 years. For more, visit www.medievaltimes.com.  The Community FoodBank of New Jersey was founded in 1975 and today distributes over 56.5 million pounds of food and groceries annually to more than 900,000 food insecure people in New Jersey. The FoodBank serves 16 of New Jersey’s 21 counties.
For more information, visit MedievalTimes.com or CFBNJ.org

themommyavenger@hotmail.com
Stuck on ideas for what to give everyone this year? We have suggestions for every member of the family! Just click on the link in our bio to discover some fun gift ideas this holiday season!
Follow on WordPress.com