A Live Taping of The View in New York City

Have you ever been to a taping of a show in New York City?  I’ve been to a couple now and they are really fun to go to.  Last fall, I went to see the Rachael Ray show and yesterday, we were able to  tickets to The View, which is now at a 24-36 month wait for tickets!

Once you get confirmation from the show that you have received tickets, be sure to arrive early, as you are not guaranteed a spot.  We were close to the front of the line and The View treats its guests very well, treating them to a complimentary breakfast while waiting.  The day was bright and sunny, so it was a pleasant wait outside.  Once we were able to check in, there was still some waiting around to do. So, wearing comfortable shoes is a must, as you are standing the entire time! 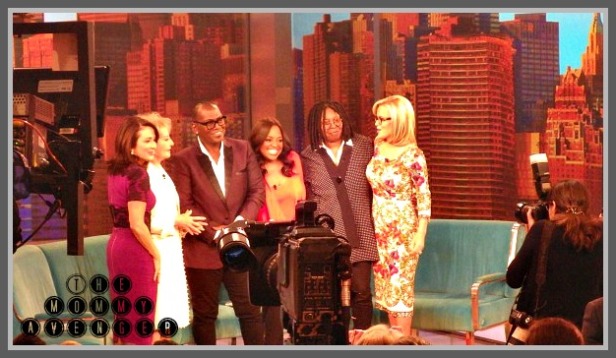 When they were ready for us, they escorted us into the actual studio, we were seated and given some fun snacks to take home.  An in-house comedian takes charge and keeps the audience very entertained and instructed on what to do.  No cell phones are allowed to be on, but if you bring a digital or disposable camera (not connected to a phone!) you are allowed to take pictures during the breaks, which is cool.

As you are on live TV, it’s important to follow protocol and it is an exciting experience.  You never know what is going to happen and it is awesome to see celebrities so close up.  The studio is really small, so no matter where you sit, it will be a great view.

Yesterday, the guests were Randy Jackson and Jason Priestley, and the show was co-hosted by Patricia Heaton.  It was nice to actually know all the celebrity guests and I especially found Jason Priestley’s segment to be entertaining.  As the studio audience, sometimes you are surprised with some fun gifts.  Both Jenny McCarthy and Jason Priestley had new books out, so we all received copies of those, as well as a $100 visa gift card from RetailMeNot.  It was fun to get those surprises during the show!

During commercials, some of the hosts would come up and answer questions in the audience and interact with us.  It was very fun to be so close and get to ask them things and hear their personal experiences.  The hour-long show flew by and my friends and I had a fantastic time.  If you live in the Tri-State area or are coming to New York City in the near future, you should check out popular shows and the taping schedules to see if you can be a part of the audience. Want to be a part of The View?  Click on this link to sign up for the wait list!