Yesterday, we were invited* to participate in the unveiling of a brand new ride at Six Flags Great Adventure in Jackson, New Jersey.

Justice League: Battle for Metropolis is the latest attraction to open at the DC themed amusement park. We were so excited to get to try it out before it opens to the public Saturday.

Upon arrival to the park, we were able to listen to Six Flags Great Adventure President introduce the attraction to us.  We even had some special VIP super heroes on hand to celebrate. “Thrill seekers, families, comic fans and gamers alike will compete on the most innovative and interactive attraction the park has ever built,” said Six Flags Great Adventure President Neal Thurman. 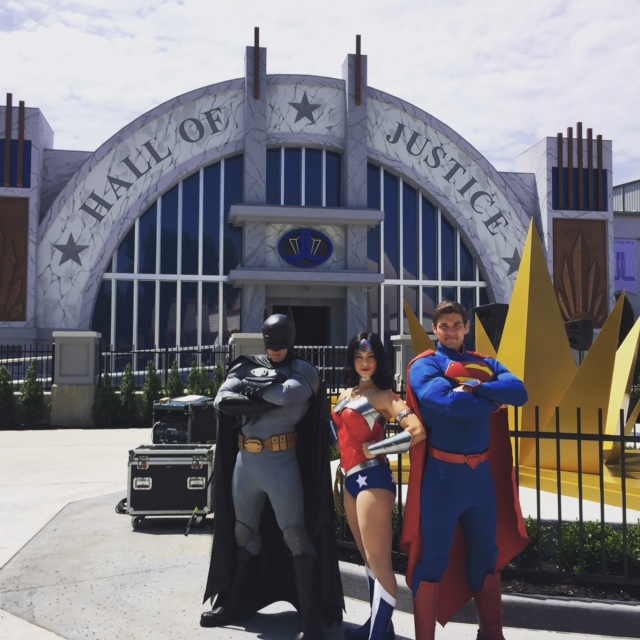 In a high-stakes clash between good and evil, guests become members of the Justice League Reserve team and engage in a full-sensory journey to save the city of Metropolis as they battle alongside DC Super Heroes Batman, Superman, Wonder Woman, Green Lantern, The Flash, Supergirl and Cyborg against Super Villains Lex Luthor and The Joker. 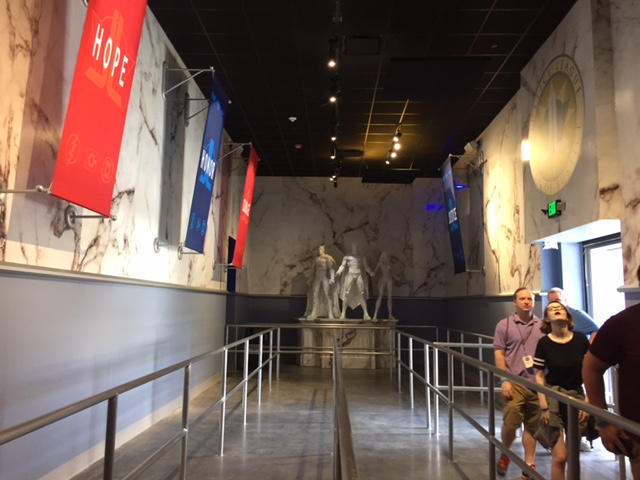 Our family loves amusement parks and DC Super Heroes, so we were thrilled to be able to take part in one of the first cars to pass through.  The attraction was reminiscent to me of some big rides I have experienced  in larger theme parks, very high-end and technologically advanced.  The production level was really extraordinary!

We were led on our expedition by Cyborg.  Just check out the detail of him!  The animatronic figure spoke to us as we awaited our cars and explained our mission. 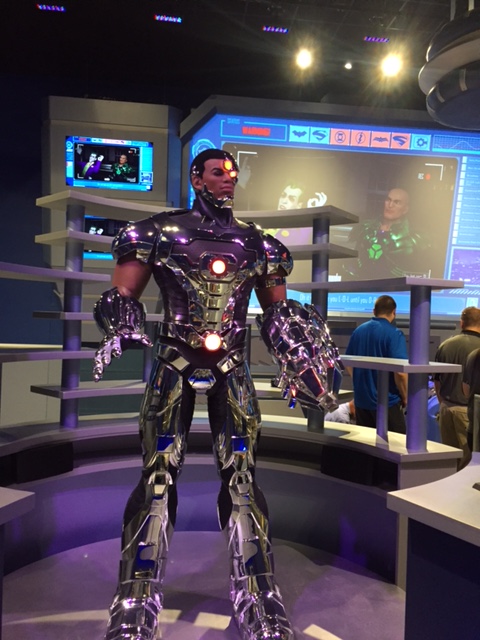 The cool thing about Justice League: Battle for Metropolis is that we were able to do so much more than just ride.  We were able to interact and immerse ourselves in this 4D experience with wind, fire, mist and fog all being a part of the ride.  Our six passenger cars were very comfortable and handled all the twists, turns, tilts, spins and 360 degree turns that corresponds with the high definition 3D animation on the screen portraying Metropolis in front in of us.  We were able to shoot at targets using state-of-the-art, real time gaming elements including 600 virtual and tangible targets inside the 22,000 square foot Hall of Justice where the ride is housed.

At the conclusion of our ride, every rider’s picture and points are projected on the screen, and then it reveals the player that had the most points  with their overall ranking.

We loved the ride!  You are definitely in for a treat getting to experience this for yourselves when it opens.  We can’t wait to go back to Six Flags Great Adventure to ride it again this summer!

JUSTICE LEAGUE: Battle for Metropolis previews to Season Pass holders through Friday, and opens to the general public on Saturday. For more information about the 2017 season at Six Flags Great Adventure, visit https://www.sixflags.com/greatadventure.

*we were invited to experience the ride to facilitate a feature, all opinions are my own.