It’s -22 degrees right now with the wind chill.  Brrr!  I am choosing to think about warm destinations and decided to share with you a really cool experience I had in Los Angeles a couple of year ago.

I will admit that I get to do some pretty amazing things by blogging.  But the end-all-be- all thing happened to me this week.  I was sent out to Hollywood to be a guest at the Lion King 3D World Premiere!

The wildly popular Disney movie, The Lion King, is being re-released in 3D on September 16th to theatres throughout the nation and also released on BluRay and DVD on October 4th.  I remember seeing the film as a freshman in high school. At that time, I recall how good the film was.  The music is legendary, the story was so good.  A lot has changed in my life since viewing the movie as a 14 year old girl!

I was a guest of Disney for this amazing weekend.  I stayed at the Beverly Wilshire in Beverly Hills, which is such an incredible hotel.  My room was beautiful, with a terrace overlooking the city.  Such an amazing view.  I spent mornings eating a delicious breakfast and taking in the California sunshine before heading out for events hosted by Disney.

To kick off the weekend, we got a sneak preview of the movie in 3D at The Grove, which was so fun.  Those memories came flooding back to that time in my life.  It was really fun!

The next day, many special interviews were planned.  We got to meet producer Don Hahn and Niketa Calame, the voice of young Nala.  I was so surprised to learn that The Lion King was not intended to be a hit, in fact, Disney expected this movie to take a backseat to Pocahontas. The entire creative process was a labor of love, to be sure.  A safari to Africa to study the movements and habitats of Lions ensured an accurate depiction of the majestic animals.  Lions were also brought into the studio for animators to study!  Speaking with Don Hahn, I was fascinated to learn his views on making family friendly movies.  He insists he will never make an R rated movie, as he feels a real sense of responsibility to the audience.  I was very impressed with his dedication to ensure high quality family films.

I loved hearing Niketa’s thoughts about participating in the film as a 12 year old girl.  One funny anecdote she relayed was that when Nala is falling down the elephant graveyard, she forgot how to scream.  To this day, the cute shriek she cried makes her cringe.  After hearing this story and seeing the film again, I couldn’t help but smile at the sound. Niketa was a pleasure to meet!

Afterwards, we got to meet the charming animators of Pumbaa (Tony Bancroft) and young Simba (Mark Henn).  As we listened, they sketched various drawings of Simba and Pumba.  It was so cool to see the characters brought to life by their creators. Traits of each of these artists were portrayed in their drawings.  We received some great advice from them, too.  If you have a child that really wants to pursue animation or art, a way to help encourage them is to provide lots of materials for them.  Supply crayons, clay, paint, pencils and tons of paper.  Look over their creations and talk to them about them.  Acknowledging their efforts helps to build confidence.  As they get older, resources like drawing and art books are available at the library.  Encourage them to learn as much as they can.  If they are really serious about it, help them find the best art education possible.  Tony Bancroft credits his single mother for doting on he and his twin brother’s drawings as a huge reason why he succeeded.  Both he and his brother became animators for Disney!

Next, we met the one responsible for bringing this handdrawn classic film to the next level, Robert Neuman.  I was blown away at what a challenging procedure this actually was.  Layer upon layer of each cell was disected and restructured to bring the 3D experience to the big screen.  So much was involved, it would really make your head spin. Math most certainly is a major component of his job! Robert is brilliant at what he does!

A highlight of the trip was a private dinner hosted by Moira Kelly, the adult voice of Nala.  Moira is famous for many roles, but probably mostly recognized by her role in The Cutting Edge.  She was so lovely!  A stay at home mom, herself, she spent the evening discussing topics real moms want to talk about.  The last thing I ever expected to do was have a “real” meaningful conversation with a celebrity.  It was very cool to see that we had so much in common.  I was so impressed by her!

The next morning found me riding in a car to the World Premiere of The Lion King 3D in Hollywood at Disney’s own El Capitan Theatre!  We arrived to a huge crowd awaiting the arrival of celebrities.  We got to walk the green grass carpet as live African music drummed behind us.  Lion King characters Timon and Rafiki danced and posed with celebrities as they arrived.  Let me tell you, being surrounded by the likes of Adam Sandler, Moira Kelly, Robert Guillaume, Melissa Joan Hart, Antonio Sabato, Jr., and my very favorite, Rick Schroder, was so surreal! 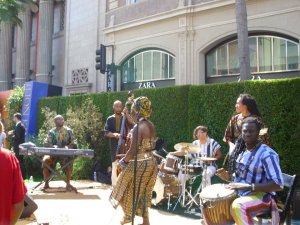 Walking into the theatre was truly breathtaking!  The colors were bright and happy.  The theatre was magnificient and transformed you to a time long ago.  Large draping curtains sat behind a talented organist playing Disney favorites throughout the years.  The ambience was truly magical.  We couldn’t help but continually smile and the energy in the building was beyond compare.

The lights went down and the curtains rose and the theatre was filled with the freedom cries of the opening scene of The Lion King.  Everyone had chills and cheers erupted.  We were thrilled to be a part of this spectacular experience.  I sat near Robert Neuman, the 3D supervisor, and I had to turn around and tell him what a magnificient job he had done bringing this Disney classic to a new level.  It was overwhelming.

After spending the day before delving into the background of this film, I truly had a greater appreciation for the movie.  The last time I watched this movie, I was a 14 year old girl.  Watching the film on Saturday, I was a mom to four boys.  The father-son relationship between Simba and Mufasa was much more revelant to my life now.  The emotional turmoil Simba faced meant so much more.  It was truly an emotional experience this time around.  We could all feel the difference from when we saw it before.

Take the opportunity to go experience The Lion King 3D on the big screen with your children.  You experienced it as a child, now here is the chance to introduce this timeless tale to an entirely new generation.  The Lion King 3D comes out to theatres September 16th for a limited engagement. Following the release in the theatres, it will also be released on BluRay and DVD on October 4th.  This, most definitely, will be something I take my family to when it comes out!

Thank you so much to Disney and Click Communications for inviting me to be a part of this truly magical experience!

Disclosure: Trip and accommodations were provided, all opinions are my own.