This past week, we were invited* to attend a showing of BEAUTIFUL the Carole King Musical on Broadway. 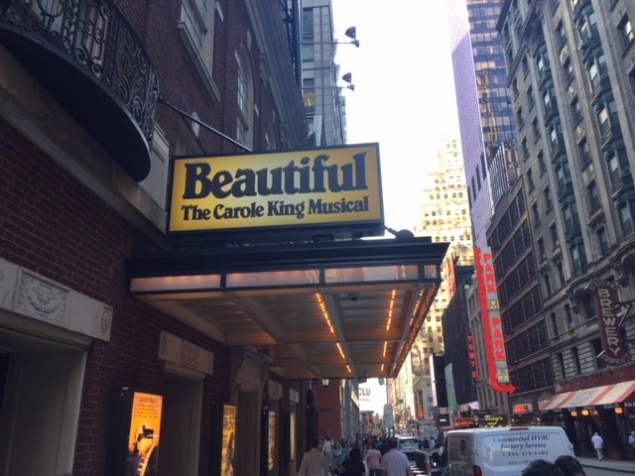 The show is housed in the Stephen Sondheim theatre, located at 124 West 43rd Street, which looks brand new after a renovation and reopening in 2010.  Walking into the theatre is unlike other New York City theatres (trust me, I’ve been in so many!).  You walk into the theatre at street level, but inside, it is actually mezzanine level.  From there, you filter your way downstairs to the orchestra section. I really liked the layout of the theatre, especially when it came to seating.  Each row was arranged stadium style, allowing you to be higher than the seat in front of you. For someone who is vertically challenged, this can be a problem when someone tall (that’s using the term loosely) sits in front of me and obstructs my view.  Not a problem at this theatre, though, and I was able to have a very clear, unobstructed view for the production we came to see.

I will be honest with you, when I walked into the theatre, I was not expecting a whole lot.  I was reluctant to think that I would like the style of music or be overly interested in Carole King’s story.  But, I had heard good things, so I was willing to give it a try.

One look at the program had me intrigued, though.  And from the moment the actors arrived onstage, I was hooked.  Invested in the story.  Thoroughly enjoying the music, which I didn’t think I would know or like.

I love real stories.  I love hearing about romance, overcoming challenges, and success stories.  I love being made to feel emotions while watching a show.  This show had all of that and more.

Carole Klein grew up in Brooklyn, NY and as a 16-year-old girl, had already made her way into college.  Her desire to write music for a living seemed unattainable, but with some persistence and hard work, Carole overcame the odds and sold some music, changed her name to Carole King, and met someone who would forever impact her life and her career, Gerry Goffin.  Together they became a superstar songwriting duo and as part of the show, we get to experience their journey.

I had no idea the songs they wrote and the impact they had on generations.  Songs like “Up on the Roof,” “Another Pleasant Valley Sunday,” “Will You Still Love Me Tomorrow,” “One Fine Day,” and tons more.  Part of the joy of the show is watching history unfold before you and hearing these songs performed.  So very enjoyable!

The show is remarkably well done, performed by such an amiable, charismatic, and talented cast.  It was touching and pulls at some heartstrings.  It was BEAUTIFUL!

I was so impressed by the show and absolutely loved it.  I highly recommend seeing it.  You can learn more about the show and book your own tickets (here’s a hint–Thursday nights are great nights to go to get great pricing on orchestra seats) by visiting their website.

*we were invited to the show to facilitate a feature, all opinions are my own.