An Evening With The Blue Man Group 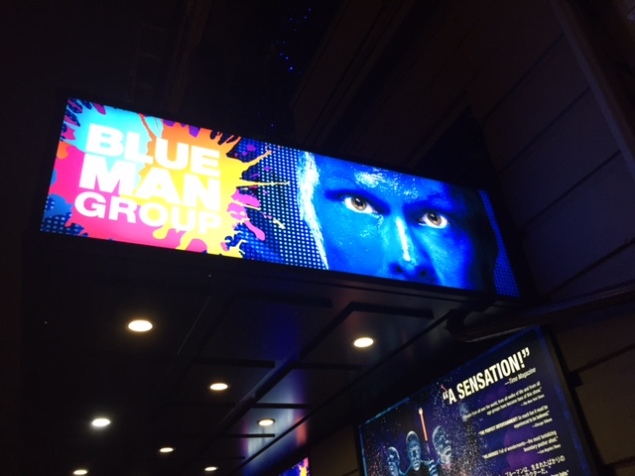 We were invited* to attend a performance of the Blue Man Group in New York City this past week at Astor Place Theatre.  I had seen the Blue Man Group before in Orlando, but had not visited them in their home city. This theatre is where the phenomena all began, before hosting shows in other cities.  I was curious to see if the performance would differ from the experience we had had before.  This theatre is very intimate, with two small levels.  A small stage was at the front of the room and I really wondered how there would even be room to perform. I quickly found that the stage area was more than sufficient for the performance, with some very creative uses of space in the theatre.

Once the show began,we were immediately drawn in to the performance.  The Blue Man Group is known for their eccentric look–blue grease paint covers their heads and faces and they wear black clothing.  Visually, this is really interesting and the addition of glowing props and splattering paint really make the show appealing.  We enjoyed listening to them play unusual instruments such as pipes and paddles, however, the show was so much more than just music.  The Blue Man Group is extremely entertaining and we found ourselves laughing hysterically as they interacted with the audience.  The members of the Blue Man Group actually come out into the audience many times (sometimes even walking across the backs of seats!) and pull individuals up on stage to perform with them. This was very entertaining and made for some interesting interactions!

Something to note is that the members of the Blue Man Group do not speak, however, the performance is rich with commentary through props, skits and body language.  My kids were amazed at how funny they were without ever saying a word.  We all enjoyed every minute of the show that ended in a high energy  party that had everyone laughing and energized.

I highly recommend seeing the Blue Man Group, as this is a show I would go see again in a heartbeat!  This would make a great gift this holiday season for your loved ones. You can learn more about The Blue Man Group and plan to attend your own show when visiting in the New York area by visiting their website.

*we were invited to view the show to facilitate a review, all opinions are my own.