Postmodern Jukebox at the St. George Theatre on Staten Island

With all of the technological advancements in the entertainment industry, it is rare to see an unfiltered show free of the usual smoke and mirrors. Whether it be CGI in our movies, photoshop in our pictures, Autotune / lip syncing in a concert, or  “I Can’t Believe It’s Not Butter!” masquerading as the salty churned stuff on our toast, we often experience life through carefully ‘crafted’ filters. On the other hand, If you have a taste for authentic, unfiltered, raw talent, in the various jazz styles of the first half of the 20th century, then you should pick up tickets to Scott Bradlee’s Postmodern Jukebox the next time they come to your town.

Scott Bradlee was born on Long Island but spent his formative years just down the road in New Jersey. He graduated from North Hunterdon High and became a regular in the New York City jazz scene.

Around 2009, he started “ragify-ing” modern songs—taking modern hits you would hear on the radio and reproducing them in vintage styles. His highbrow, yet retro style has garnered a huge following on YouTube over the years and opened the door for a wide variety of collaborations.

Personally, my retro flavor leans more towards deep cuts from 1978 to 1994, but I am glad a friend of mine tipped me off about this show. Postmodern Jukebox has grown to over 50 professionals putting on multiple shows, touring throughout the world. Their concerts are known for the performers’ infectious energy, beautifully-belted vocals, catchy rhythms, talented tap dancers, and top-tier musicians. 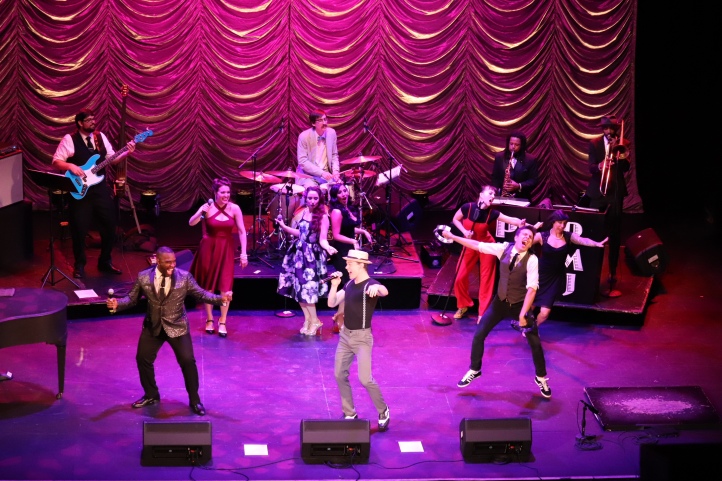 The show took place at the St. George Theatre on Staten Island. The inside decor was a hodgepodge of statues, murals, and carved wood. You can always count on the East Coast for buildings with character; none of the minimalist walls and sparse decor. The bathrooms had friendly attendants, and there were plenty of bartenders around but not many snacks.

The concert attracted a broad audience from Rockabilly girls with cherry lipstick to musical families, with plenty of hipsters and older  jazz-cats in between. 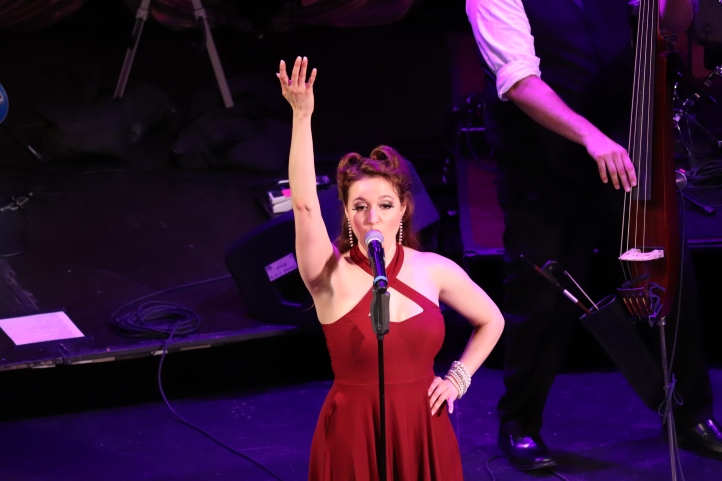 Like the Laurence Welk show back in Grandma’s day, tonight’s concert had a master of ceremonies to introduce the artists and enhance audience participation.

The concert maintained its head of steam with almost no let-up for the whole performance, yet there were some stand out performances. Some of my favorite moments included:

– Opening to an up-tempo do-wop of Celine Dion’s My Heart Will Go On.” Regular musical jokes (like the McDonald’s have it your way theme tossed out from the pianist). “Cry me a river,” “Thrift Shop,” “Grenade,” “All-star,” “Oops, I did it again,” and the best: “We Can’t Stop” barbershop encore. Oh, and Tim the tambourine guy is still a hilarious spaz.

The only disappointment was that the set list was an hour and a half and the encore was only twenty minutes. At least there are videos! Check it out their videos on their website here.

*we were invited to see the show to facilitate a feature, all opinions are my own.