Rock On and Stick it to the Man!

Over the years, I think I have seen some crazy amount of musicals and plays, into the hundreds, easily. Totally fun to get the opportunity to see so many shows in New York and the surrounding vicinity, but I have to say, much to my surprise, all shows are NOT created equal.  Having come from out west, I really thought if a show made it to Broadway, it had to be spectacular.  Over the years, though, I quickly learned this was not the case!

Why do I share that with you?  Because it has been quite some time since I was impressed enough by a show I have seen to leave totally energized and wanting more.  This happened to me last week when we were invited to come see School of Rock The Musical on Broadway! 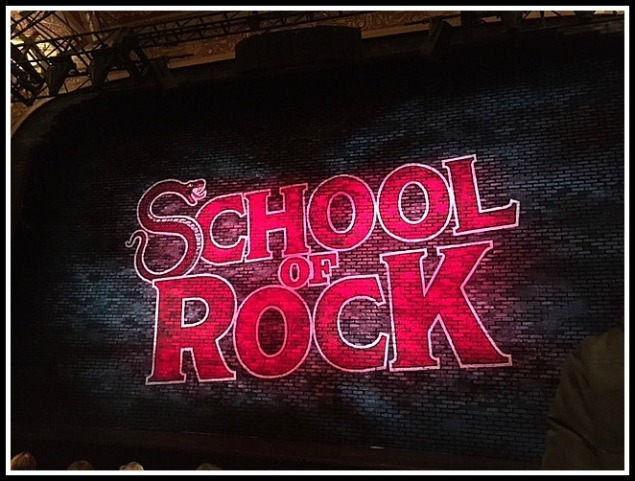 Based on the movie starring Jack Black, Andrew Lloyd Webber, one of my all time favorites, created a new rocking musical of the same name. Alex Brightman, plays the main role of Dewey Finn, a  lackadaisical wanna-be rockstar, who just can’t get his break…that is until he pretends to be his roommate and begins substituting at an exclusive straight-laced prep school.  He unearths some extreme talent within the classroom walls and quickly devises a plan to achieve his dreams with the help of his unsuspecting students.

Now, I really, really liked the movie.  I wasn’t  sure how you could make it better and wasn’t entirely sold that you could turn it into a Broadway production, but let me assure you, it is SO much better than the movie.  Amazingly, we get to experience the talent of the students, as well, as they each play and sing live on stage throughout the entire show!  You will get chills because they are so good!  Alex Brightman is extremely charismatic and has a great rapport with this group of students and we, as the audience, get to experience the magic that comes from that.

School of Rock has soared up to my top 3 of favorite musicals of all time!  The musical is catchy, fun, and upbeat.  There is a contagious energy pulsating within the walls of the theatre that will make you become completely invested in the characters and the show, and that hasn’t happened for me in a very long time.

When the show concluded, I immediately purchased the soundtrack (unheard of for me!) because I wanted to make sure I was able to listen to it on the way home.  Since that time, I’ve listened to it over and over again and love it even more every time I do. I can’t wait to go back with my kids.

School of Rock is a must-see!  Take your family, every member will love it!  You can see School of Rock in New York City as it plays at the Winter Garden Theatre.  Purchase your tickets online, you won’t regret it!